In the world of piping and pressure vessels for the off shore production platforms and FPSOs, the application of duplex UNS S31803 (22Cr) and super duplex UNS S32750 (25Cr) has received a significant boost in recent decades. The material is relatively strong (high tensile strength), which allows lighter construction and is relatively corrosion-resistant and wear-resistant. Basically a golden combination. However, history has shown that processing and welding the material will not automatically lead to success. A practical case at PMF Mechanical.

In the Netherlands, PMF is one of the companies where piping and pressure vessels are made in duplex and super duplex. Controlling the welding process is important in order to guarantee the special properties of this material in the products mentioned. Over the years, the knowledge and control in practice at PMF has been expanded and further developed in collaboration with international experts from the leading oil companies.

Commissioned by ConocoPhillips, PMF manufactured four so-called “cans” with a wall thickness of 25 mm and ten pipe spools of 2” – 12” for the new “Vertical Barrel Pumps” for the Norwegian oil field Ekofisk. Based on the expertise with both ASME and Norsok (Norwegian standards) in combination with the PED, the contract was awarded to PMF. The processing of super duplex in combination with the aforementioned standards was a challenge beforehand. After deliveries to large projects of Statoil and BP, PMF can consider itself among the select group of suppliers of duplex and super duplex vessels and piping that can meet the requirements for welding, materials, processing and coating.

In the project for ConocoPhillips it was the combination of requirements for the welds in the field of tensile strength (cross weld min 700 and 900N/mm2), impact strength (min 27J at -20 degC), hardness (max 350 HV10), ferrite (30 and 70%) and corrosion resistance (4 mmd) that required a thorough preparation of the welding.

Initially, the requirements for the corrosion resistance of the medium side of the weld which is checked by ASTM G48 Method A seemed the most challenging. The corrosion resistance check is carried out on a test piece from a weld which is exposed to an acid solution at a temperature of 40 degrees for 48 hours. The maximum weight reduction may be 4 mdd (mg/dm2/day) and “no pitting” based on the Norsok.

It is preferable to weld the last weld layer on the corrosion side, usually the inside pipe or the hull plate. This is of course not possible with smaller diameters in this project. In that case, a relatively thick base layer is laid with a heat input between 2.0 and 2.5KJ/mm, and then relatively thin filling layers with a heat input of around 1KJ/mm.

If the base layer is too thin, followed by a filling layer with a higher heat input, the base layer will receive a full or partial heat treatment, with the result that the ferrite already present will excrete austenite. This austenite does not have the same chemical composition as the ferrite formed earlier. and austenite, at the interface of these two structures a separation will occur resulting in a very local attack in a suitable environment, so that your material will not pass the corrosion test.

For the welder, the mentioned base layer is not easy to weld, usually with a base layer between 1 and 1.5KJ/mm. One of the solutions that contributed is to make the nose of the weld edge slightly larger (1.5-2mm) to make it easier to control. An additional advantage is that we have created more mixing from the basic material.

The structure required by Norsok M-601 should be 30-70% ferrite. This structure ensures the good mechanical properties. This ferrite content is met by not allowing the interpass temperature to rise further than 70 to 80°C. Controlling the interpass temperature is also important with regard to the corrosion requirements. When welding a pipe with a small diameter, this must be taken into account with each layer. PMF has divided the round seams of small bore piping into quadrants which are welded at certain intervals in order to control the temperature and keep it below 70 to 80°C. Especially not easy to realize with smaller products and small wall thicknesses.

In order to meet the strict requirements of corrosion resistance, one could choose to weld the base layer with a pure Ni welding wire. However, the requirements with regard to a minimum ferrite content of 30% will then not be met. A typical example of a solution to one problem that violates other properties of super duplex. In order to be able to meet both requirements, a welding consumable has been chosen to which Cu has been added. In addition, in order to minimize the escape of nitrogen from the weld, pure nitrogen was chosen as the backing gas. In accordance with many customer specifications, this is not allowed. An alternative shielding gas is then 98%Ar with 2% N2 to compensate for the loss of nitrogen. However, here lies the loss of ferrite. We have already built up positive experience within PMF with this gas.

After thorough preparation of the welding for this job, the previously challenging combination of requirements was met without any problems. All testing and NDT on the products have been found to be acceptable and all of the aforementioned criteria have been met.

I want to get in touch! 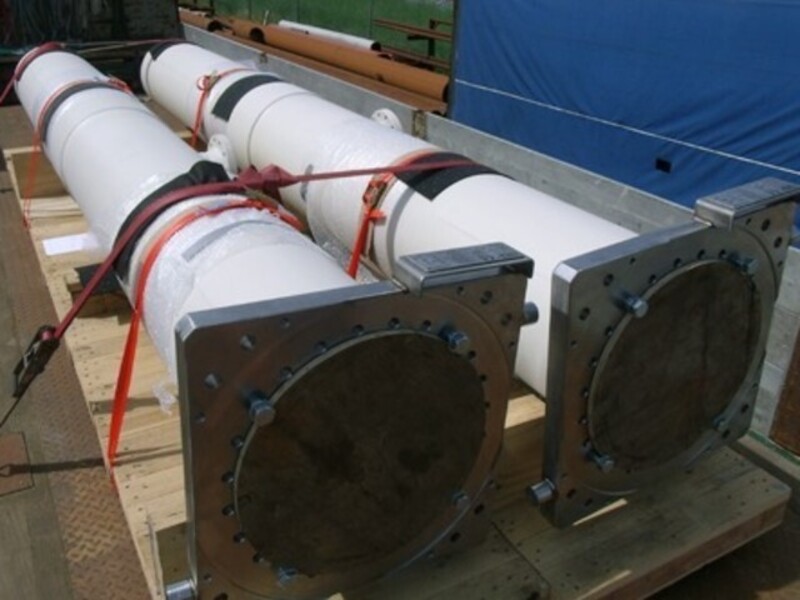 Do you have a question or would you like more information? Please feel free to contact us!